My gap year experience in Africa

My gap year experience in Africa 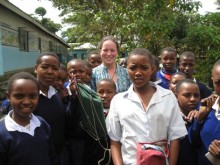 I would have to say that the most valuable attribute I have gained from volunteering is confidence. This confidence takes many forms, all of which will help me enormously in the years ahead at uni and beyond!

Making the decision to actually travel to a faraway country didn’t take a lot of bravery when a computer screen separated me from the reality of the situation! However, the decision to go through with the consequences was quite hard when I was faced with a load of strangers at the airport, from where I was going to carry on alone. The fact that I went through with it was the first stepping-stone to helping me become more confident.

My house was just two rooms, and I was placed with three girls who I barely knew – slightly daunting! I now have the knowledge that I can live in close proximity with other people, and make the best of it; even better, I can even make some amazing friends! Getting to know the people who will be living around me in halls is not such a scary thought anymore!

Travelling in a foreign country would probably have filled me with dread in the past – I was extra-paranoid even when I was travelling locally! However, the spontaneous way we could organise our travel arrangements in Tanzania showed me that there is always a way to get around! Another positive aspect is that after all the experiences I’ve had on public transport around East Africa – from having to find a spare wheel for a tuk tuk in the countryside of Kenya, to hitting an elephant in a train – there can’t be much that will scare me any longer!

Some of the things I did whilst on my gap year demonstrated to me the power of the mind. Standing on the ledge over a 144-foot drop, and making the decision to jump off takes some courage! The memory of these experiences will stay with me forever as evidence of my inner confidence.

Another quality I feel like I’ve received is adaptability. There were only rare occurrences when things worked out exactly as we had planned them! This would have infuriated me at home, but while I was out there I chilled out a lot. Now my attitude is much more relaxed – it will happen when it happens. I feel like this attitude is much healthier in our stressful society!

Lastly, I have a greater tolerance, for people as well as for food. I was thrown together with a diverse group of people and they were my only contact with the world I had left behind. Some of them were not the kind of people I would normally have hung out with, and yet I found myself getting on with all of them! It just shows you that people can have qualities you admire, whatever their background. On the food side, my mother is eternally grateful, as she can now cook much more varied meals, due to the fact that I eat many things I once would have refused to touch!

AV (the organisation which arranged Rachel’s placement) was so amazing throughout my entire trip; they had the perfect balance of support and trust. I felt like I had the ability to do things for myself, and increase my self-sufficiency, and yet they were always there in the background if I needed them. It was my own experience, but I had that invisible safety net at all times. Our local contact, Nangini, was fabulous! By the end of our stay, she was more than just our supporter, she had become our friend, confidante, and someone I hope to stay in contact with for a long time! Next year’s group are so lucky to have her!