00:00:04 Hi, I’m Senior Air Craftsmen Simon M. I’m a Personnel Administrator within the Royal Air Force. Well, currently I’m based at RAF Scampton which is obviously within Lincolnshire there, based with the Red Arrows, where I’m one of the personal administrators of the team now, or human resources as they’re more commonly known term for us now.

00:00:21 We look after all the guys from ground engineers right the way up to the pilots there covering all aspects of administration there be it leave passes to sorting out pay queries or arranging for people to go on courses, specialist courses if they need it for depending on the job they’re doing.

00:00:39 The person who probably most inspired me is my father. At the time he was serving in the Royal Air Force so basically it was, I’ve lived overseas in many different stations in Germany and in the UK. I’ve looked up to him and the career and the time that he’s had in the service and how he’s fully enjoyed it now. He’s actually out of the RAF now but he still harps on about the days he was in there about it all. I think it initially started off, everyone want to be a pilot in the Air Force.

00:01:08 Running around the playground making airplane noises, you watch the war films and think, “Yeah, that’s great, I want to be one of those.” And then started looking into it further and then decided that, no, I didn’t want to be a pilot as it were. I wanted to be what they call part of the ground crew so like I say, looked into that, had a look around and saw what skills I had that I could take with me into it. It probably pays off.

00:01:32 I would say, the top tip is whatever you’re good at at school or what you’re interested in, take those skills away with you because that’s going to be a job and a career there for you. I mean, myself, I was interested in, I was good at English and maths and thought, “Oh, well, I can go in the admin world there where you look after people,” which, I’m a good people person, I feel. And then also you, if you’re good with numbers you can work in the accounts department for it all.

00:01:57 You’re not pigeonholed in one trade. There’s varied trades out there that require all sorts of skills and qualifications.

00:02:05 In the training phase, yeah, there is, yeah. You’re getting up early, you’re working long hours, you’re, like I say, if you’re doing the physical element of it you’re running around a lot, you’re going to feel tired and everything through it all then. Possibly some low points there. Initially when you’re there for nine weeks, you think it’s a lifetime.

00:02:26 But you muck on through it and everything and then the passing out parade, right at the end when you’ve finished your training, is a sense of achievement that you’re not the person you were when you started there and what you’ve got to take away with you.

00:02:37 I mean, you start off there and you’re in greens, you’re running around, it’s going to be cold and wet, you go through it all and then at the end you’re smartly dressed, you’ve got your Mum and Dad there or your aunties and uncles and everyone and they really look at you and you think, “Yeah, you’re proud and you can stand there and think, yes, I’ve achieved something and I’ve got through this.”

00:02:57 When I left training I was initially posted down to Royal Air Force Bentley Priory which is down in Stanmore, just within London, doing a similar sort of job as I’m doing now.

00:03:07 It was a lot more office based, not working with aircraft, no airfield on the station there. Looked after about 130 people actually on the station. From there I actually applied to join the Red Arrows, volunteered and thought one day I’d like to work with the team, be a good career move and certainly a boyhood memory from apparently I was told when I was born on an RAF unit and came out when the Red Arrows were flying over so I figured, well, it’s destiny or something like that. A good career chance to work with the team.

00:03:42 Promotion is the next hope for me up to the rank of Corporal and certainly I’d like to do a full term service within the Royal Air Force there, hopefully gaining as much promotion as possible to advance through the ranks there and obviously get a bit more responsibility and authority within my role. ENDS

By pursuing a career in the Royal Air force, Senior Air Craftsman Simon M is fulfilling a childhood ambition and folllowing in his father's footsteps. In acknowledging his skills, Simon realised a role in ground crew played to his strengths and he is now striving to build his level of responsibility and authority, with hopes of achieving promotion to Corporal. 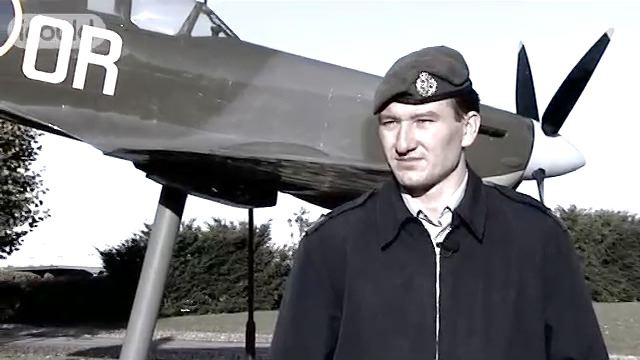