0.00.00 My name’s Dave B. I’m 23 years old and I’m an Instructor at PGL Caythorpe Court. Instructors at PGL are called GLI’s. They’re group leaders and instructors. So as well as doing the instructing you’re on all the sessions, the rope sessions and the groundwork sessions. You also get the opportunity to group lead as well where you get groups coming in and you’re in charge of them for the week, looking after them, taking them to breakfast, lunch, dinner and also organising evening entertainment. And I myself have got extra qualifications to do kayak instructing

0.00.30 and raft build sessions as well, which is something I gained through PGL over winter. It’s my first season as a kayak instructor here and so far it’s going really well. When I was in school I was very much into drama. I was always doing performing arts and dancing and singing and all the rest of it. But I got to the point in my life where I realised I wasn’t quite good enough to actually be on stage and I decided that I didn’t really want to do the kind of backstage stuff or any understudy work. If I’m doing it I want to be the star of the show. I wasn’t quite good enough so I decided to kind of rethink my plans.

0.01.00 Well I decided to have a gap year because I wanted to do some more travelling. I got the opportunity to travel when I was in secondary school. I went to Uganda for a month with the school, a group of 12 of us went over there and had an absolutely amazing time there. Got to see the culture and people and a place that I never would have been able to see otherwise. And from that I just caught the travel bug. So I decided to have a gap year. I travel technically on my own but there was no point in the trip when I was on my own. Wherever I went to I’d go just, you know, the local backpacker bar,

0.01.30 go in there and just start chatting to likeminded people who are in the same situation of didn’t know anyone, didn’t know where to go, so everyone just kind of gelled, started talking to each other and it was very likeminded. My dad is a Minister. My mum’s a dietician so when I was growing up we moved around a lot cos my dad’s job required him to move every five to six years. So through that I got to see a lot of the country and I got to get used to kind of making new friends and saying goodbye,

0.02.00 which has definitely helped when I’ve got into my later and moved around and when I’ve been travelling as well, I find it very easy to make friends because of that. Both my parents went to university. They actually met in university, that’s how they know each other, yeah, that’s how they met in the first place. They encouraged me to go to university but they have always let me make my own decisions. I really respect them for that. And that I think they would still like me to go to university and I think the family as a whole would generally be happy if I had a degree, but at the same time they respect what I’m doing and that they’re glad I’ve got the focus now.

0.02.30 The biggest milestone recently was when I decided that I wanted to do an adult pursuits degree. I thought yeah, I’m going to make the transition and I was kind of waiting around for the course to start, didn’t really know what to do, was working at a kind of dead end sales job and my younger sister went on a school trip to PGL and she came home and she said to me, I’d never heard of PGL before, she was like came home, been to this PGL holiday and she said the instructors there are nearly as crazy as you.

0.03.00 And it was like okay, I’ll look into this, so I went on the website, found out a bit of information and thought yeah, I’ll give it a try and then two months later I was on the training course, came here and yeah, loved it ever since. In my leisure time I enjoy to kind of do the outdoor stuff that I do here but at a level that’s more suited to myself, cos PGL is great for taster sessions but it’s not particularly hardcore and being a bit older I like to go, you know, go climbing and go kayaking and more interesting places and scuba diving’s a passion of mine, I’ve always been into scuba diving from when I started travelling.

0.03.30 Since I’ve been doing this more and more and from my travelling I’d love to go and emigrate over to New Zealand cos I fell in love with New Zealand when I was there, I can see myself living there for a very long time and open up a small activity centre that did sort of kayaking, diving and climbing and run that for tourists over there and locals as well, cos they’ve got the natural beauty and the facilities to do it. And yeah, and it’s very competitive but I’d like to get into that.

Dave is an Activity Instructor at outdoor activity centre PGL. After deciding he wasn’t good enough to go in to performing arts he re-thought his plans and had a gap year. When he came back he decided to do a degree in outdoor persuits, before his course started his sister introduced him to PGL, he did some research, applied for a job and has never looked back since. Dave plans to open an outdoor activity centre in New Zealand at some point. 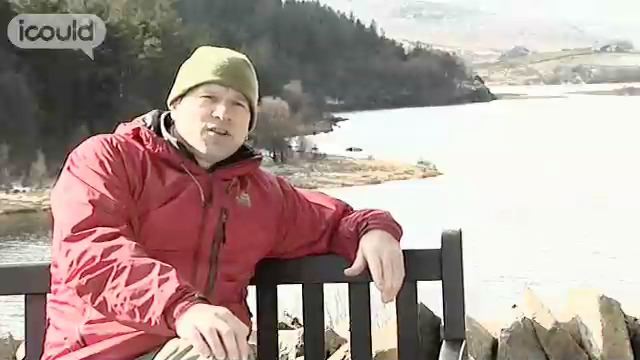