0.00.02 My name’s John B. I work at the Birmingham Disability Resource Centre and I’m the information officer. The time when I was at school it was the early to mid-80s. The time of the one in ten unemployment. A lot of the kids in that era talked about you never going to get a job, there’s no apprentices, there’s no point doing any good in school. I was lucky in a way that my grandfather run his own business which was an electro-plating business. And I always presumed straightaway that I would go and work for him as soon as I left school.

00.00.41 I worked for my granddad for six years. Then I finally realised that I had enough of working for family. As the years went by I realised a lot more pressure is put on family members. I couldn’t see it working out there so I finally took the decision to leave and just walked out. Had a big argument with my granddad and off I went. It wasn’t so much pressure on what the family did, it was pressure as being related to my grandfather.

00.01.10 For example, every year we’d put out the holiday sheets for people to have their holidays and say for Whitsun he’d put a week shutdown. And I would arrange to go away on holiday with my friends for that week and a couple of days before the holiday he would turn around and say, ‘I need you to come in next Tuesday and next Thursday to do this’, and as soon as I would complain that I can’t, it would be the same old excuse from him that one day this’ll be yours you’ve got to do it. And I just thought it was too much pressure being put on at that age.

00.01.43 I was out of work for about four months and then a friend of mine told me that there was a job going in a company that he worked for doing the same sort of work, electro-plating. So I phoned them up and they asked me to come down. I had a quick interview and I got the job and I started working there and I was there for nine years. I acquired a disability in spine. I was lucky in the company that I worked for they provided a lot of equipment to make sure I could continue doing the job. I managed to stay there say for nine years until I got made redundant when they decided to move production to China.

00.02.20 So I had no qualifications or training in anything else so I was stuck. That lead then to an interview with a disability employment advisor and after a discussion, I was offered a placement at a residential college in Mansfield. I took them up on the offer and I was in Mansfield for about nine months learning computer courses and mainly a CISCO networking course. And that lead then from there into computers into the Disability Resource Centre and into the work I’m doing at the moment.

00.02.57 Regrets looking back, I think I wish that I’d done better at school but I only found out the problem when I was at the residential college, why I didn’t do good at school. I was under the impression then that I just wasn’t brainy enough to complete it and that’s why I slowly went down the sets. And I just wasn’t interested any more so I just thought it’s me, I’m not going to learn it, I can’t figure it out and that’s it. And from going to that college and understanding there are different ways to learn, it’s changed my life around anyway.

00.03.34 I would say when I acquired my disability it is the biggest event. It was the worst event of my life but it also gave me the opportunity to retrain, to find out about what’s happened in the past at school and to go on to get a better job. So I look at it as a very positive and best event of my life really, it changed it.

John B is the information officer at Birmingham Disability Resource Centre. He has a disability of the spine, so it was a big blow when he lost his job in the electro-plating business. He went to a residential college to study computers and networking. He says acquiring the disability was the worst event of his life, but it enabled him to go to college and change his life for the better. 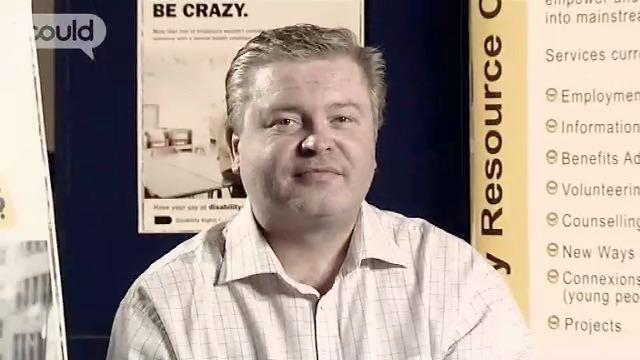