00:00:01 I’m David Greaves and I’m Deputy Electrician. I basically do lighting, sound, anything which has a plug on it basically. I’m a qualified high access technician, which basically means that I can climb ropes and abseil down ropes. I do rock climbing, and I do indoor climbing as well, so I’m – I love it

00:00:28 My Dad was an actor in one of the amateur societies, and they needed some help on stage during one of their shows, and I went along and helped out, and ended up carrying it on, and when my Dad stopped I didn’t! I never did it at school, I always kept it quiet at school. The schools I went to didn’t really support it, they were more sports side of things and stuff like that. When I got to college it was brilliant, it just felt so good to be studying what I was into. I learnt so much at college. My lecturer was in the circus, so we also learnt circus skills and the lot, and it was absolutely brilliant.

00:01:12 When I was at college I worked at a small scale theatre in Barnsley. I lit a lot of the shows for them, and we did a show called Up and Under. We took it to a festival, and I won an award for best technical and stuff like that. So it all came together and it was like this is what I’m going to do, this is what I want to do. I just basically love theatre. I love the magic of theatre and I still go and watch shows and think – that’s absolutely cool. I mean there are still things where you go – actually how did they do that? That’s the highlight of my job for me, is watching people leave in really high spirits, and dancing about because they’ve just seen an excellent show and they’re on a buzz.

00:01:56 In my job you’re always working to a deadline, which is that opening night. It’s like it’s – you’re always under a push to get there, and you’re always on your feet, you’re always doing something, and that’s what I like. I’m an active person, so I like putting up a set and rigging the lights, and running up and down the ropes and stuff like that, it’s just me!

00:02:24 My problem is I’m a hands-on person, I like to be down on – I like to be on the stage rigging the LX, rigging the sound. Yeah I could move up to be like a Chief Electrician or a Stage Manager or something like that, but I just wouldn’t enjoy sat round in the office doing the office aspect of it. I just love being on the stage, I love doing the active role of it, and just watching it all come together and being part of it. I could go on further and be coming into designing, and I could go on tour, and I could go and work in London on the West End, so there’s loads of other things I can do in the future, and there’s loads of places to go, and things to do.

David has found a career he is passionate about, a career that allows him to combine his love of people, practical tasks, climbing and theatre. He came into his own at university and now, as a qualified high access technician at Leeds Grand theatre, he is building on all he learnt in his studies and his part time work. 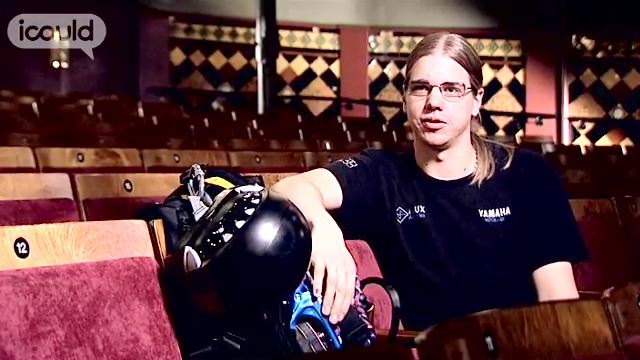