We use cookies to improve your experience of our site and to track site use. Please let us know if you agree to these cookies.
No, I want to find out more
Career ideas and information for your future
Explore: Transport and logistics

00:00:02 My name is Eva B, I’m a train driver for ScotRail. When things go wrong you have to communicate with people and that’s when really the pressure starts to tell and we’ve got to do things, you know, right. Obviously we’ve got to bear in mind that you’ve got maybe 300-400 passengers that you’re ferrying around so you’ve got to do everything to the best that you can do.

00:00:27 You know, I’m probably not your average typical train driver and I quite like that about the job. Mostly the reaction that you get from people is really good, positive. I can’t say that becoming a train driver is something I always wanted to do. Probably a bit of luck, a bit of influence from friends that encouraged me to go into the job. When I was at school probably I was more interested in the science subjects, maybe maths and chemistry and geography.

00:01:02 I wasn’t overly great at the arty subjects or, you know, English and things like that but definitely the science based things were my favourite. I probably went through lots of different phases as a young girl of different jobs, you know, I wanted to be an air hostess or I wanted to be an archaeologist. You know, it was so extreme. I hadn’t any sort of clear career path in mind. There was nothing that sort of jumping out at me at that point.

00:02:31 I knew when I was in there that I didn’t want to stay in there. I couldn’t have stayed in a job like that forever basically. I definitely wanted to go on and do something else. Why did I decide to become a train driver? I have to blame my boyfriend for that one. He was already in the railway and when the positions came up he sort of encouraged me to apply. I just fancied it, something a bit different.

00:03:01 I’ve never been into the sort of stereo-typical girlie jobs so I thought that was something that appeals to me, a different challenge, so. I think the next thing for me is to go to the instructing side. I have recently started the driving instructor programme whereby you get a trainee to come with you. Teaching, you know, new drivers isn’t something that I had thought about prior to starting the instructing but I found I really enjoyed it and I would really like to go out and make more of it. ENDS

Eva B is a Train Driver for First ScotRail. It’s not something she planned to be, in fact she went through university and into a job without having any plans at all. But her boyfriend persuaded her to apply to be a train driver and she took to it. Now she’s thinking of becoming a full-time instructor.

Description
? Job holders in this unit group drive diesel, diesel-electric, electric and steam locomotives that transport passengers and goods on surface and underground railways, and transport passengers in trams.
Qualifications
There are no formal academic requirements. Entrants must pass a series of tests and a medical examination. Age restrictions apply in some areas of work. Good hearing, good eyesight and normal colour vision are required. Off- and on-the-job training is provided. NVQs/SVQs are available at Level 2.
Tasks
Employment by region
?
Top 10 industries for this job
?
Land transport, etc 18351
Warehousing, etc 2903
Air transport 1017
Employment status
?
Skill importance
? 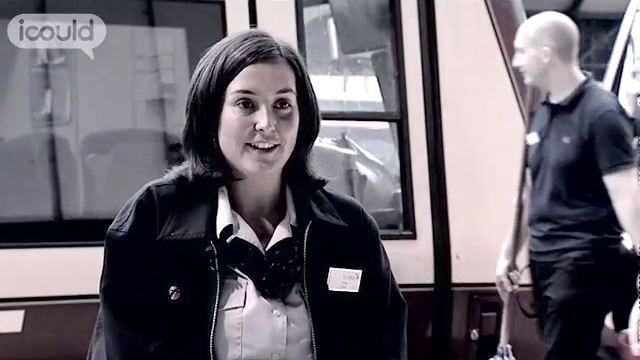