My name is Steve H; I’m a mixing operator at PPG. I’ve been down here about twelve years, and my job is to mix the mill-based paint before it’s tested. Once it’s tested, it’s filled and sent out to the customer. I’ve moved up slightly from the role I took on when I first got here, which was a filling operator, which was basically filling the paint into cans before it went to the customer. I’m now, like, as I said, at the mixing stage, which is a floor above. I’m obviously not in management or anything, but I’m at the, kind of, the upper end of the manufacturing chain.

00:00:32 I was in the Air Cadets when I was at school, so I always thought I was going to have some kind of military future, but initially my heart was on, kind of, graphic design or doing something to do with that. I got offered a graphic design course at the same time as I was applying for the army. I decided at the time whichever acceptance letter dropped through the door first, that’s the one I’d do because it was more of a fate thing. It was a close run thing because the army’s acceptance form came in the morning post and the college acceptance form came in the afternoon post, so they both arrived on the same day.

00:01:05 So it was very, very close – a matter of hours. I was a chef in the army. I did it for ten years, mainly based in Germany. While I was there I did two tours of Northern Ireland for six months, and then back to Germany, and then I came back to the UK on my final posting, and about five months later I came out of the army. I felt I’d done everything there was to do. Also, I was finding it hard to take it seriously, you know. If we went on exercise, it would be kind of you’d put your NBC gear on – your nuclear gear on, your biological gear on – and you’d have a brief telling you that the Russians were coming at three o’clock. I often used to ask them if they were coming for dinner on that one, but… I’d do extra. I found it really hard to take that seriously.

00:01:53 I did various catering jobs in pubs, clubs, old people’s homes, a prison for two weeks, and I kind of come out of that because what deterred me a little bit was it tended to be unsocial hours and low pay. The prison one was interesting. I had an interview with the governor, and he kind of pulled a bag up from under his desk and said ‘This is the findings of this morning’s cell search.’ He kind of emptied it out and there was all kinds of horrible tools that they’d made in their cells, you know, the usual kind of toothbrush type ones and all sorts. That and everything else, I just thought ‘I don’t really think I should be working in here.’

00:02:34 I think this job is probably the best job that I’ve had since I left the army, although I’ve had a few. I’ve had about fifteen to twenty jobs since. Some ranging from four hours, to four days, to four weeks, you know. I was going for jobs really just to be in a job, you know. It could be like a chicken factory, for instance, where it absolutely had nothing to offer me, but it was a job. Even though my career path was… I went the military side. I carried on with my interest in art. And it wasn’t really until I left the forces that I found I actually had more time on my hands, as well, to dabble.

00:03:12 And I started painting again two years after I left the forces. For me, the art is a release. I think I use my art to relax, and also to release and express. When I’m painting, I’m not thinking about anything else at all. I think where I am now is probably where I shall stay, unless there’s something more kind of creative offered to me, even be it kind of matching the colours, you know, for the cards, etc, something more like that. But I don’t think I’ll… I don’t think I’ll want to try and move up into management or anything like that. I don’t think that’s for me. When I finish at, say, two o’clock, I’m finished. I don’t take work home with me. I don’t think about it again.

Steve H has seen real variety in his jobs. He let fate decide whether he joined the army or took a graphic design course and then spent 10 years in the army as a chef. After this, he worked in about 20 different jobs until settling as a mixing operator at PPG. He values his work life balance, and now has a satisfying job and time to pursue his interest in art. 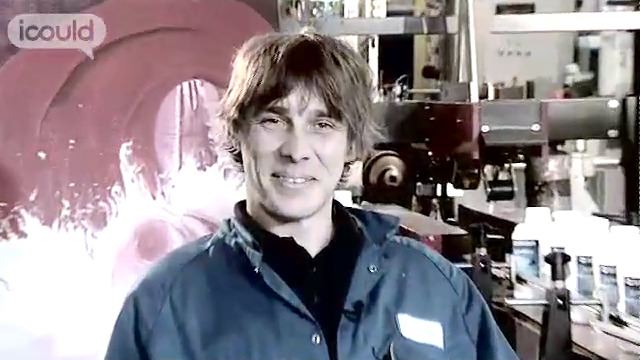